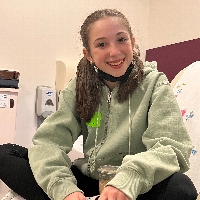 Ashlyn’s “All In” to Conquer Cancer Page

In 2016, Ashlyn Brysiak was diagnosed with Leukemia. She was only eight-years-old at the time.

Prior to getting sick, Ashlyn was a normal little girl who loved to draw, run and spend time with friends. But most of all, she loved to play soccer. When she first learned of her cancer diagnosis, she didn’t cry. She wasn’t fearful of the many medical procedures she would need to endure. She wasn’t afraid of losing her hair because of the chemotherapy treatments. None of that bothered her. It wasn’t until she learned she would need to miss more than a year of soccer that she got upset.

Leukemia treatment in children is a long process. It takes years to fight the disease. Ashlyn underwent active treatment for 27 months. During that time, she had multiple surgeries; was hospitalized several times; needed a half-dozen blood transfusions; took thousands of pills; and lost her hair three times. She was so sick during treatment and her body so weak that she needed more than a year of physical therapy to learn to walk properly and run again. It was a grueling process and painful process. But in her mind, all she wanted to do was play soccer again.

Once Ashlyn was strong enough to run and her doctors gave the green light to try it, she immediately got back on the soccer field. It wasn’t easy for her, and she struggled. Ashlyn was still sick and remained in treatment. But she didn’t care. She was determined to play with her friends and teammates. If she could run – even if just a little – then she was going to play. Cancer wasn’t going to take that from her anymore.

In August 2018, after more than two years of treatment, Ashlyn was officially declared “cancer-free” and in remission. She was finally ready to put cancer behind her and begin to work her body back to 100 percent.

Today, Ashlyn is 14-years-old and she plays soccer for two different teams: East Pennsboro Area Middle School and Keystone FC. Her battle with cancer was long and difficult. But no matter how tough things got, Ashlyn persevered. She pushed herself and did everything she could to fight back.

Ashlyn’s good health today can be attributed only to the great doctors, nurses and care providers at Penn State Hershey Medical Center. The pediatric cancer unit there is supported each year by the Four Diamonds Foundation, which funds research and care. Four Diamonds also ensures that no family whose child is undergoing treatment at Hershey-Med ever sees a bill from the necessary cancer care. They cover everything. It is truly a life-saving organization.

Thanks to Four Diamonds and the team at Penn State Hershey Medical Center, kids like Ashlyn have a second chance at life.

Search for a Participant

Get The Word Out