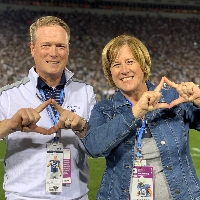 Like many people, my family and friends have been impacted by pediatric cancer.  I first became aware of Four Diamonds when my children participated in the MiniTHON program at their high school.  I joined the Four Diamonds Advisory Board in 2016 and today I am honored to serve as its current chair.

Four Diamonds was founded by the Millard family in 1972 while their beloved son, Christopher, was battling cancer (https://www.fourdiamonds.org/about-us/).   Before he died, Christopher penned a short story about a gallant knight who overcame an evil sorceress by winning the four diamonds of courage, wisdom, honesty and strength.  It was a story of optimism and hope through the eyes of a child – that, like the sorceress, cancer would ultimately be conquered by the four diamonds.

Search for a Participant

Get The Word Out